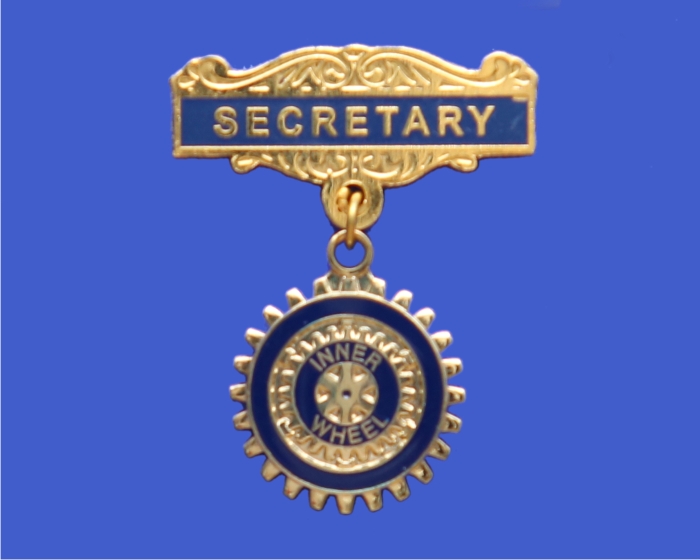 When I was with one of our Members, Mavis Carrington, she handed me a box of IW brooches which her stepson had bought at an Auction.  On going through them we discovered an IW Member’s badge bar belonging to a Mrs G. Obray which had a Past President and Past Club Secretary of the Isle of Sheppey Club in District 12 on it.   We were both very intrigued to find out more about this lady so I contacted the Isle of Sheppey Club and one of their Members, Linda Taylor, sent this reply:

‘Gwen joined our Club in 1985 having retired from teaching.  She had taught at Minster County Primary School and was well respected by staff, parents and pupils alike.  Although she did not teach my children, she was a prominent figure at their school and well-remembered by so many.

Her husband Arthur was a Rotarian but he died probably 6 -8 years or so before her.  Although, they shared other activities including, Cage Bird Society and Dahlia Society, of which she was secretary and committee member many times, Inner Wheel was her first love.  Gwen did not drive but attended almost all District events and as many Inter Clubs as she could.  If a driver was going, so was she!

She was always pleasant company, had a jolly sense of humour and joined in everything.  She was very knowledgeable on I.W. matters and served as our President on 4 occasions between 1988-89 and 1993-4. as well as serving as Secretary several times.  I often joined her at I.W. events, and she served as my Secretary.  She attended her (and mine and fellow member, later PDC, Lynn O’Meara’s) first I.W. Conference in Blackpool 2005.  What fun we had!  She managed her last Conference, whilst living in Cheshire, at Telford in 2015.  By now she was on a walking frame and already frail but determined to meet up with our Club and District members one more time.

Gwen decided to move to Winsford, Cheshire to be nearer her daughter, several years ago, unfortunately, I do not have a date but think it was around 2010.  However, she continued to pay her membership dues and remained a member of our club until her death in 2020.  We would send her a regular letter, along with Inner Wheel paperwork so that she was up to date with all the local news, which she loved.

Our members have many fond memories of our time with her. It was lovely that you decided to follow up on the history of Gwen through her badge.  She, like many other past members was a true I.W. member putting friendship and service at the top of her agenda’

I hope you have enjoyed learning a little about Gwen Obray; now she is not just a name on a badge! 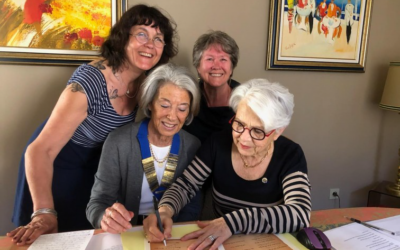 Inner Wheel of Truro links with Figeac in France

Inner Wheel of Truro links with Figeac in France During Covid the Inner Wheel Club of Truro has established links with a similar club in France. The Truro ladies raise funds for charities such as The Refuge and Macmillan Cancer Care and our local hospice. The ladies...

Inner Wheel of Truro links with Figeac in France During Covid the Inner Wheel Club of Truro has established links with a similar club in France. The Truro ladies raise funds for charities such as The Refuge and Macmillan Cancer Care and our local hospice. The ladies...